On 1 March 1936 Hitler ordered three battalions into the Rhineland, although his army generals disagreed with this action. One week later, on 7 March 1936, Germany moved troops back into the Rhineland. This remilitarization was in direct violation of the Locarno Treaty. However the British Empire did not want to go to war over this incident as ‘the Germans just entered their backyard’. Without any British support, although France was not entirely happy with the situation, it also was not inclined to go to war. Hitler meanwhile stated that the move was not at all intended to damage France. He also put out his wish to strengthen the peace in Europe and even invited the Western European countries to renegotiate a new pact.[1]

Many consider the remilitarization as a direct violation of the Treaty of Versailles. However, although article 42, 43 and 44 do mention that Germany cannot use the area for any military conduct, it does not mention any reference to a time period. But it was against the Treaty of Locarno signed some 10 years earlier.

On 12 February 1938 Hitler met with the Austrian Chancellor Kurt von Schuschnigg to discuss the Anschluss. Hitler put his demands on the table and if the Chancellor would agree, he could keep his the current Austro-German agreement from 1936 in effect and Austria would keep its sovereignty. When the Chancellor returned home and suggested to go ahead with the demands, the Austrian President Wilhelm Miklas refused one of the demands, namely to appoint Austrian Nazi leader Arthur Seyss-Inquart to become the Security Minister. A short while later the Chancellor tried to settle this dispute with the President democratically by voting on it. However Hitler had put a deadline in place, either hand over power to the local Nazi leaders or face a military invasion. As the Chancellor also found no support with Great Britain or France to support Austrian independence, he decided to renounce his post. On 12 March 1938 German troops entered Austrian but faced no resistance. Instead, many German-Austrians saluted the Wehrmacht, waving flags and handing out flowers. The invasion became known as the Blumenkrieg, the War of Flowers. 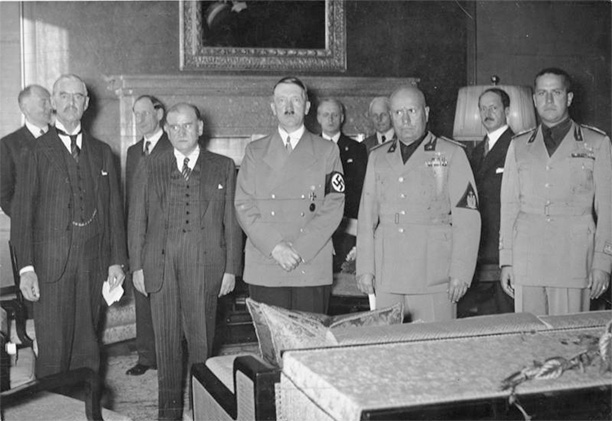 Later that year, in September 1938 Hitler met with Chamberlain at Berchtesgaden and Bad Godesberg to discuss the Sudetenland in Czechoslovakia. In this region lived about 3 million Sudeten Germans. Hitler wanted to include them into the Reich. Chamberlain in principle approved with the idea as long as Hitler didn’t want to take the whole of Czechoslovakia. Together with the French prime minister Daladier and the Italian premier Benito Mussolini, on 30 September 1938 the Munich Agreement was signed.

Later Chamberlain declared it as a ‘Peace with Honor’.

On 1 October 1938 German troops marched into the Sudetenland.[3]

As part of the Munich Agreement, Czechoslovakia had to settle any border disputes with Hungary and Poland. Most of the conflicts were a direct result of the Treaty of Trianon, signed in 1920. This treaty made Hungary to give up on territory for the newly created state of Czechoslovakia.

On 2 November 1938 representatives from Germany, Italy, Hungary and Czechoslovakia met in Vienna. Whereby Germany and Italy were presiding over the First Vienna Arbitration. The result was that Hungary gained quite a bit of Czech territory. This result is known as the First Vienna Award.

In March 1939 Germany occupied Czechoslovakia. Hitler had literally wear out the Czech prime minister Emil Hácha, who in the night of 14 to 15 March signed the document to allow German occupation. Hácha had tried to persuade Germany from any aggression towards his country, and is said to have fainted twice during negotiations that night.

Both the British Empire as France did not lodge formal complaints again the occupation.[4]

In October 1938 Germany proposed to renew the Pact with Poland in exchange for allowing Danzig to become German again, as well as the building of a freeway and railway between East Prussia and Germany. Poland refused these terms and as such Hitler dissolved the Pact on 28 April 1939. As he said in his speech to the Reichstag:

“This obligation is contradictory to the agreement which I made with Marshal Pilsudski some time ago, seeing that in this agreement reference is made exclusively to existing obligations, which meant at that time the obligations of Poland towards France, of which we were aware. The subsequent extension of these obligations is contrary to the terms of the German-Polish Non-aggression Pact. Under these circumstances I would not have entered into this pact at that time. For what can be the value of concluding non-aggression pacts if one partner makes a number of exceptions in the execution of them? The alternatives are – either collective security which is nothing but collective insecurity and continuous danger of war or else clear cut agreements which exclude fundamentally ;in), use of arms between the contracting parties. I, therefore. regard the agreement which Marshal Pilsudski and I once concluded a., having liven unilaterally infringed by Poland and therefore voided.”

Whether or not Hitler was sincere in his gesture towards Poland for a 25 year peace treaty in return for the city of Danzig and a safe corridor between Germany and East Prussia, remains to be seen. He might have known that Poland would reject his proposals, which would offer him a way out of the 1934 treaty.

Meanwhile Germany had been negotiating with Russia and in August 1939 a Pact was signed. This so called Molotov-Von Ribbentrop Pact consisted of two parts. The first part was an economical pact which would exchange German manufactured goods for Russian raw materials and was signed on 19 August 1939. Four days later, on 23 August 1939 the second part, a 10 year non-aggression pact whereby each country promised not to attack each other, was signed. This second pact also contained a secret agreement that Poland and other Eastern European countries would be divided between both countries.[5]

This pact should not have come as a big surprise as in 1922 (Treaty of Rapallo) and 1926 (Treaty of Berlin, which was renewed in 1931) were signed. Both treaties increased the friendly relations between the two countries.

On 1 September 1939 Germany invaded Poland. Two days later the British Empire however stood by their Pact with Poland and declared war on Germany. World War II had begun!

On 17 September 1939 the Soviet army invaded Poland as well, but neither France nor the British Empire declared war on Russia.

World War 2 has started and both Germany and Russia have invaded Poland. When you examine the Pact between the British Empire and Poland it states that the contracting parties should support each others against hostile European powers. However the British Empire only declared war against Germany and not Russia. Moreover it only took marginally action and so the first few months is rather called the Phoney War or Twilight War.
Even though the British declared war, they were military not ready to fight a war. And furthermore it is being said that they never intended to declare on Russia, given a secret protocol in the 1939 Pact which stated that it would only protect Poland from German aggression.[6]

Did Hitler try to continue his luck when he decided to invade Poland, with the backing of their pact with Russia and with the hope to appease Chamberlain again?
Was it all along the plan that Germany more or less would stand alone in this war against the Allies? Or otherwise said, was Russia always going to be an Allied power?